The year is coming to an end, and it is time to recap. A lot has happened in the last 12 months, and time goes by so quickly that it is necessary to look back, take in what we have experienced and learned, and of course celebrate it.

2022 has definitely been fruitful. For L.E.V. and for many of us, it has been the year in which we have been able to get back together in a big way. We have never stopped, and in both 2020 and 2021 we squeezed every last drop of what the situation let us (always in a responsible way) to celebrate editions of the festival and adapted activities with alternative formats, both face-to-face with reduced audiences and online. However, it had been a long time since we had been able to see so many people together enjoying the festival’s shows. And this year, we witnessed it again.

Spring was once again the season for the celebration of L.E.V. Festival in Gijón. After having to change the dates last year and, as we already mentioned, some formats, the long weekend of May 2022 brought to the Asturian city some of the most renowned artists and new talents in the field of electronic sound creation, audiovisual creation and contemporary digital art, bringing back experiences such as the night-time performances at the Nave de Laboral Centro de Arte.

With the support of the City Council of Gijón and the Principality of Asturias, L.E.V. focused this year’s program on concerts, audiovisual performances and installations that took place in different venues in Gijón, with a line up headlined by the emblematic English producer Squarepusher, and audiovisual shows as impressive as the multimedia performance The End of the World by Ukrainian pianist Lubomyr Melnyk together with collective spime.im and cellist Julia Kent. 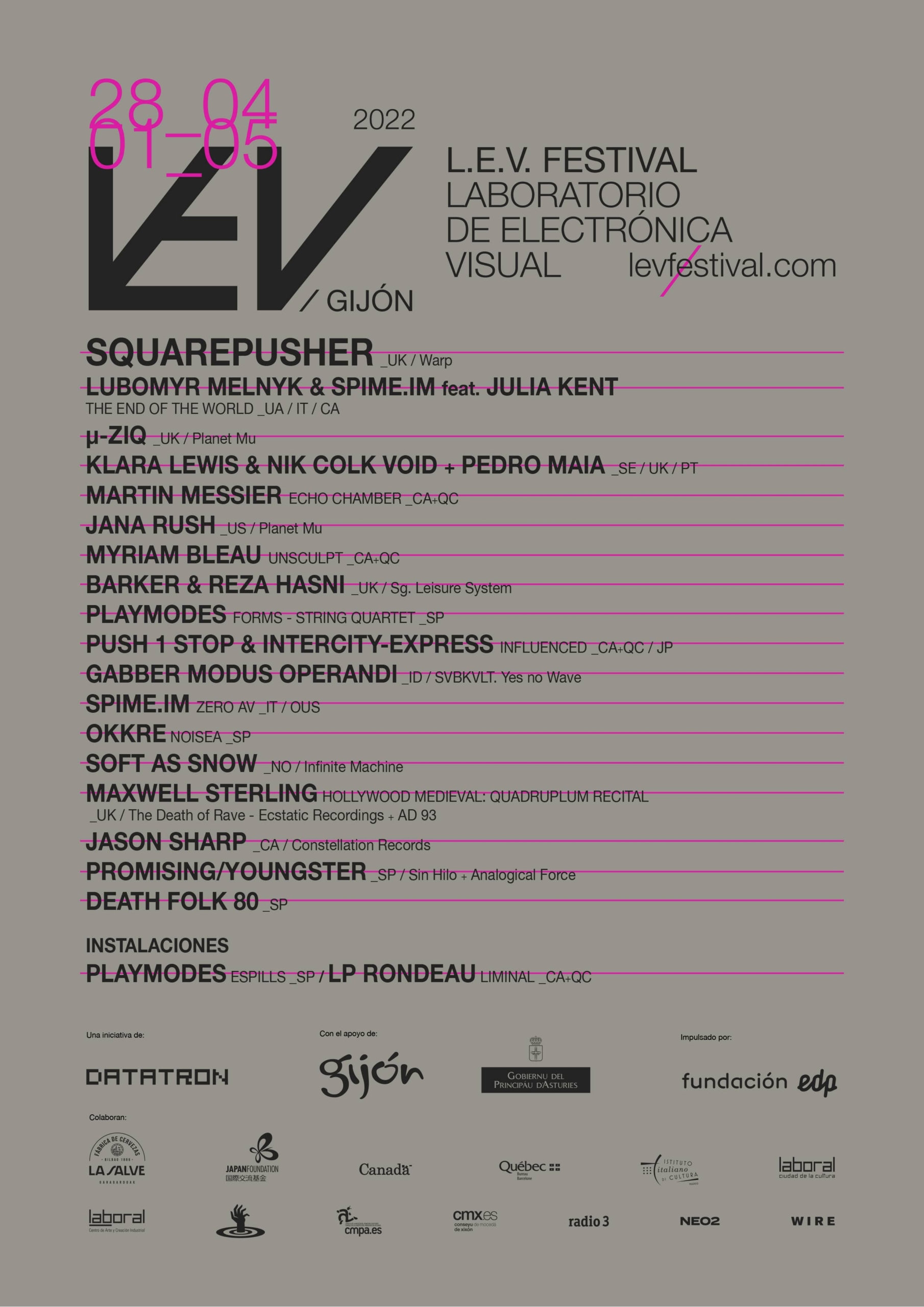 In addition to the festival’s own activities, we collaborated once again with the Arenas Movedizas, AV culture experiment project promoted by the Gijón City Council’s Youth Office, which has celebrated its 20th anniversary in 2022. Together, we presented different virtual reality and augmented reality activities open to all audiences at the Escuela de Comercio.

The fourth edition of L.E.V. Matadero has also brought back moments that we missed in the last years. Among them, the live concerts and audiovisual performances in Nave 16 and Plaza Matadero, that showcased national and international artists such as the acclaimed German composer Alva Noto, the multi-awarded Japanese artist Daito Manabe, the unstoppable Catalan composer Marina Herlop, the duo of Canadian producers Sinjin Hawke and Zora Jones and many others.

This edition has also established some lines of the programme as essential to the celebration of the festival in Madrid, such as the VORTEX section, which sold out all its passes of artistic virtual reality and VR Cinema experiences, or the augmented reality activities of the Augmented City section. Among this year’s new additions was the participation of MAD Madrid Artes Digitales with a large-format immersive installation.

Within this edition of L.E.V. Matadero we also held Sounds of Immersion, a programme in collaboration with Medialab Matadero consisting of a sound workshop for XR environments and a series of presentations by artists participating in the festival.

Metaverses: Realities in Transition opened its doors in the framework of L.E.V. Matadero, but it expands beyond the limits of the festival showing until January 29th at Matadero Madrid’s Nave 0 a selection of virtual environments proposed by and for artists. The exhibition includes other activities such as the PatchXR Introduction Workshop, which took place at the beginning of December, or the NeuroXcape Hybrid E-Rave 666, which will be held on 14 January.

The exhibition is supported by the Ministry of Culture of Taiwan, the Taipei Economic and Cultural Office in Spain and the Austrian Cultural Forum, and it is part of the project Realities in Transition, co-funded by the European Union and consisting of Seconde Natu-re (France), L.E.V. (Spain), KONTEJNER (Croatia), Ars Electronica (Austria), Dark Eupho-ria (Francia), V2_ Lab (The Netherlands) and iMal (Belgium).

The launch of this European project has been another of the major milestones of the year for L.E.V. An ambitious joint commitment to explore and support alternative creation of XR and to experiment with and promote new narratives and processes, driven by different platforms and institutions working in this field of creation.

Within the framework of this project, other initiatives have also been launched recently, such as the call for artistic XR projects to participate in a residency programme at the V2_ Lab in Rotterdam (Netherlands), which has received more than 120 applications and is currently in the process of selecting its participants.

In 2022, we have also curated two very special pieces for Noche Blanca de Oviedo, a local celebration with which we have been collaborating since 2018. On the night of Saturday 1 October we joined the programme with the audiovisual installations Aura by Álex Posada & Xevi Bayona, in which rings of light installed in trees vibrated to the rhythm of sound generating a kaleidoscopic show; and Visual Sounds Of Finland / Visual Sounds Of Brazil by Andy Thomas, created through 3D sound and visual representations of his research into the fauna and flora of different countries.

This is not everything that has happened in 2022, but it is a wide enough selection to show a year that we say goodbye to with a feeling of great satisfaction and a big thank you to all the people who have accompanied us.

Very soon, we will share news about what’s to come in the next months…

About L.E.V. Matadero 2022: a four-day immersion in visual electronic music...